Legendary directors like D.W Griffith, Sergei Eisenstein, William A. Wellman and King Vidor have used war stories and history to bring those epic tales to the big screen.

The 2nd World War remains to be the most heavily depicted event in cinema. From such propaganda films as Triumph Of The Will (1935) and The Life And Times Of Colonel Blimp (1943) to more recent films like The Pianist (2002) and Downfall (2004) audiences never seem to tire of the emotional magnitude behind one of the greater conflicts of the modern world.

The Hollywood machine still churns out it’s fair share of war films. The soldier, the army or a particular battle tend to take the front stage in it’s productions… the sub-plot still very much centred around war.

Some European directors on the other hand have used war as a backdrop, or, rather as a setting behind the stories told of characters whose very limitations are shaped by the tragedy of conflict.

From Poland, to the Czech Republic and Russia, these countries have suffered great losses as a result of war… yet somehow they have crafted deeply humanistic tales we relate to, by using war as a backdrop.

‘Will only ashes remain and chaos? Or will the ashes hold the glory of a star-like diamond?…’

Andrzej Wajda’s third chapter in his trilogy of films using war as a backdrop- following A Generation (1954) and Kanal (1956), is a masterpiece of Polish Cinema and an outstanding example of the realism that was being produced in Eastern Europe in the 50’s and 60’s.

Upon the devastation and aftermath of the 2nd World War, the film takes place in a small town somewhere in Poland. Maciek (Zbigniew Cybulski) and Andrzej (Adam Pawlikowski) have been assigned a mission to assassinate the Commissar Szczuka of the residing Communist Party.

After their initial botched ambush attempt results in the wrongful killing of 2 labourers, the pair are given a second chance to rectify the undoing. However, as they wait for the time to strike, Maciek develops an infatuation with the hotel barmaid Krystyna (played by the magnetically alluring Ewa Krzyzewska).

With the looming melancholy of a people desecrated by a Nazi, and subsequent Soviet occupation, the Director uses this bleak setting to tell a familiar story of the difficult choice one faces at the crossroads. As the protagonist looks inward for redemption, he must lock horns with the exterior forces that pull him in another direction.

Often referred to as the ‘Polish James Dean’, Zbigniew Cybulski was raw, rebellious, and died tragically young. On his way home from a film set in 1967, he jumped from a moving train, slipping and falling under another train. He had just bid goodbye to his close friend Marlene Dietrich, who was a passenger on the train.

Based on the 1957 short story Ivan by Vladimir Bogomolov, this, the first feature film by Andrei Tarkovsky; one of the most influential directors of the modern age, took the attention of an international audience and remains as one of the more influential films of it’s time.

Using the war as a backdrop and detailing the human cost of such tragedy, Ivan’s Childhood went against those films that would glorify the conflict. Other Russian films of the time such as The Cranes Are Flying (1957) and Ballad Of A Soldier (1959) are also more than worthy of a mention.

With a non-linear plot that is peppered with dream sequences and flashbacks, the film tells the story of an orphan boy and his experiences close to the Eastern Front during World War 2, as the Soviet Army fights to repel the invading German Wehrmacht. 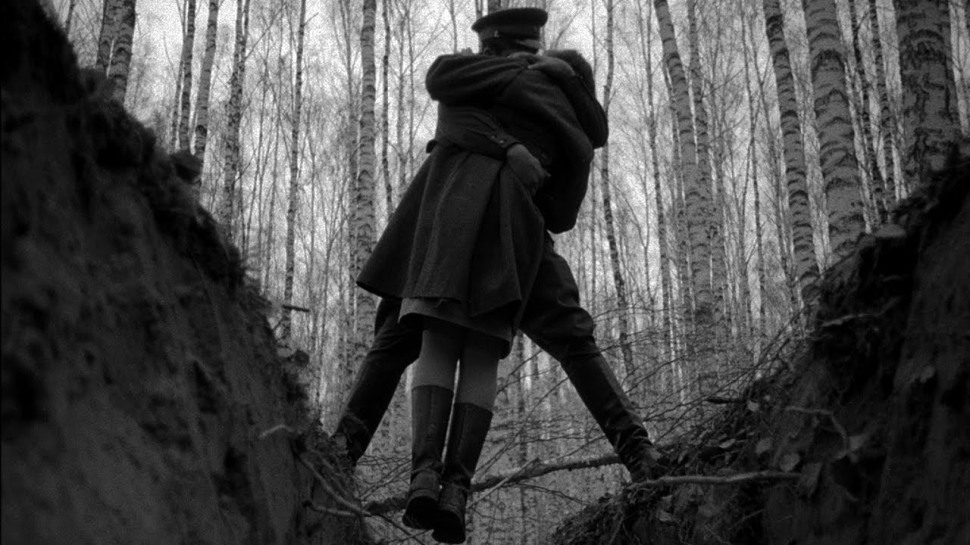 Through the youthful eyes of our protagonist Nikolai Burlyayev, we observe a hardened child flirting with death on reconnaissance missions and hellbent on revenge with an enemy that has robbed him of his childhood years.

Just as Francois Truffaut did with child actor Jean-Pierre Léaud 3 years prior in The 400 Blows, Tarkovsky managed to capture with a 12 year old Nikolai Burlyayev in Ivan’s Childhood.

At the beginning of the film, as a young Ivan is seized by Russian troops and interrogated, he berates the elder soldiers with such a callous tongue and draws the audience’s attention as if he were holding centre stage in a packed theatre.

Burlyayev would go on to work again with Tarkovsky in 1966 with Andrei Rublev.

Based on the 1965 novel by Bohumil Hrabal, it won the Best Foreign Language Oscar at The 40th Academy Awards in 1968. The pair would collaborate in later years, modifying other novels into script-format.

For a young adolescent like Milos Hrma, one’s burning ambition should not exceed the small Czech village in which he is raised. He looks up to his family of average folk and drifters with great pride, he aspires to be no more than a sleepy railwayman and relishes a premature retirement like his father.

Upon this railway setting we follow our protagonist through all his adolescent and sexual endeavours on the winding track to becoming a man.

This clever satire uses the stark backdrop of war and a Nazi aggression over Czech society to give it’s characters an earthly quality. It deals with such heavy themes as espionage, murder and suicide… still the character’s humble ideals remain unbroken.

Certainly, if there is one thing you take from this film, it’s that Czech humour flashes a cheeky smile even in the face of war.