This is the story of a timeless marriage. A working combination between two creative entities, and two enigmatic figures. Both are capable of weaving enchanting tales; one with images, the other with words. Still, in many ways they are, forthwith, one and the same.

This is the story of the camera and the typewriter. Or, more specifically, the pair of artists that made magic from them. And the creative relationship between writer and filmmaker, that resulted in a string of important art house films in Japan, during the decade of the 1960’s. 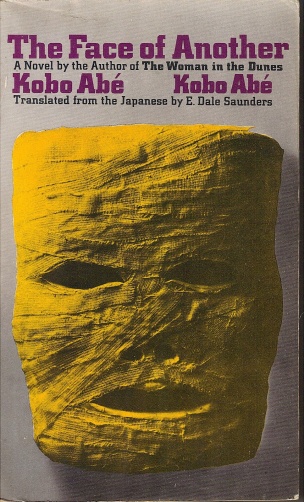 ‘If there were no risk of a punishment, a getaway would lose the pleasure…’

Truth be told, both individuals had never primarily intended to pick up a camera; or sit behind a typewriter, for that matter. In fact, it was initially thought that the pair were destined to follow in the paternal footsteps of their father’s respective careers. And, for the most part, it would have been unusual that one would have assumed anything otherwise.

Kimifusa Abe was the son of a doctor, himself a medical graduate of Tokyo University. Whilst for Hiroshi Teshigahara, it was simply expected that he would someday inherit the highest position at Sogetsu-ryu school of Ikebana (the Japanese art of floral arranging), of which his father, a grandmaster of the craft, had founded in 1927.

But Kimifusa Abe would never come to practice medicine professionally. And under the literary pseudonym of Kobo Abe, he quickly became known as a proficient poet, novelist and playwright. For Teshigahara on the other hand, he would get his first taste for filmmaking after working as an assistant to controversial socialist documentary director Kamei Fumio in the 1950’s.

Both shared a common interest in the modernist art movements of the time, like Expressionism and Surrealism. Abe was influenced by the existential thinking, and absurdist literary worlds of such writers as Kafka and Moravia. While Teshigahara, (himself a painter and graduate of the heralded Tokyo Arts Institute) marvelled at the avant-garde work of Breton and Picasso.

Their worlds were to meet at a junction, when, after a finance loan from his father, Hiroshi Teshigahara formed the progressive arts club, Seiki, where the two became prominent members and close friends. By this point Kobo Abe had already achieved local and international fame from his recently published novel, The Woman in the Dunes; for which he won the prestigious Yomiuri Prize for literature in 1962. Teshigahara had already read the novel, and indeed had ambitions to one day adapt the story for a film.

Hiroshi Teshigahara was to get the green light for his film adaptation… and fate was to prove far more promising yet. The two would strike up a deal to collaborate on four projects in total; working closely on set to produce visual interpretations of Abe’s novels and subsequent screenplays.

Their global contribution to the rising tide of film movements at the time helped to usher in a brand new wave of art house cinema, and reshuffle the pecking order that once dominated the industry. 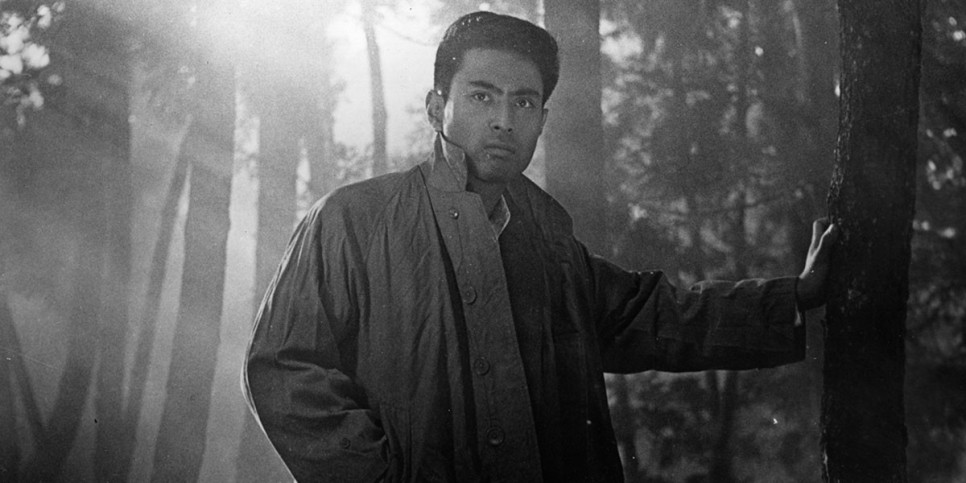 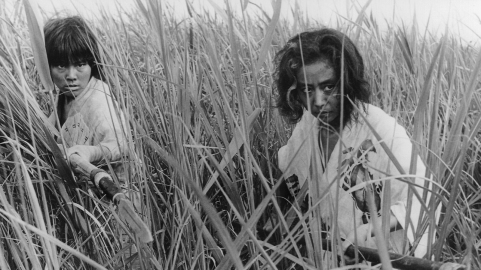 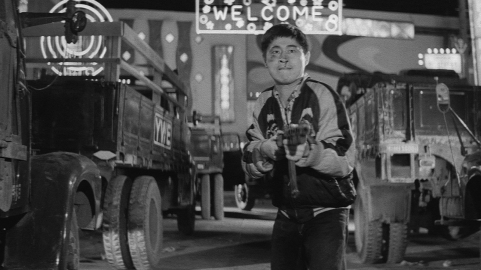 ‘The ‘New Wave’, like it’s counterparts in France coincided with the ascendancy of television and the rise of a metropolitan cine-literate audience in the large cities of Japan…’

It was 50 years ago almost to the day that the pair released the last of their four collaborative films, Moetsukita chizu, or Man Without a Map in 1968, based on Abe’s novel The Ruined Map.

But it’s their trio of earlier films, released in the space of five years, that chiefly demonstrate the visual style that was to become so powerfully compelling on screen… being that they each share the same screenwriter (Kobo Abe), director (Hiroshi Teshigahara), cinematographer (Hiroshi Segawa), and composer (Toru Takemitsu).

We take a look back at these three important films below…

‘Even if I run from here now, I’ll probably just end up at another mine…’

With the prospect of finding work, an unemployed drifter and his adolescent son are lured to the pit of a mine, on the fringes of an ostensibly desolate village.

Instead of landing a job, however, the father finds a fate far worse than his former predicament. A run-in with an unnamed assassin (literally dressed to kill in a debonaire white suit) banishes the young father from the world of the living… leaving him to roam the outskirts of the mine in a trivial state of purgatory.

The world of Kobo Abe and Hiroshi Teshigahara is indeed one of glorious contradictions and bitter irony. And Pitfall, the pair’s first feature collaboration (from the script of Abe’s television play Rengoku) perhaps best exemplifies this.

Here is a wonderful balancing act of the real (shot on location around an actual mining village in Kyüshü/ interspersing the film with stock footage of mining disasters and worker’s strikes) and the surreal (the ghosts of miners that inhabit the village/ the absurdist routine monotony of the worker).

This contradictory world of juxtaposition and fatalism could easily be placed within another context; the stock exchange, or a boarding school for instance. It’s the metaphor of the pit, and being bogged down in any of life’s trivial predicaments that speaks volumes. 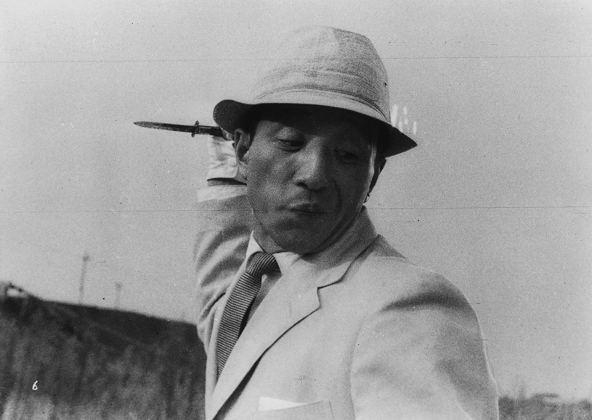 With equally powerful performances from Hisashi Igawa (who plays both the out-of-work miner and the union boss) and Sumie Sasaki (the solitary village shopkeeper), certainly one of Pitfall’s strength’s is in it’s brevity and frugality. With the direct precision of a Haiku poem or a hypodermic needle, the psychological elements of the film get under the skin, and manage to sit with you for well after the end credits.

Igawa also featured in many Kurosawa films, including Madadayo and Ran; as well as playing the starring role in Kobo Abe’s stage production of his 1969 surrealist play The Man Who Turned Into A Stick.

Although production was soured at times by creative differences (Teshigahara had 2 assistant directors fired on set), Pitfall was a strong cinema debut for Teshigahara, and a fantastic example of the pair’s contribution to the Japanese New Wave.

Woman in the Dunes – Suna no Onna (Toho Productions 1964)

‘What counts is less what is being done than how: not the larger gesture towards ‘significance’ but the obsessive day-to-day detail…’ 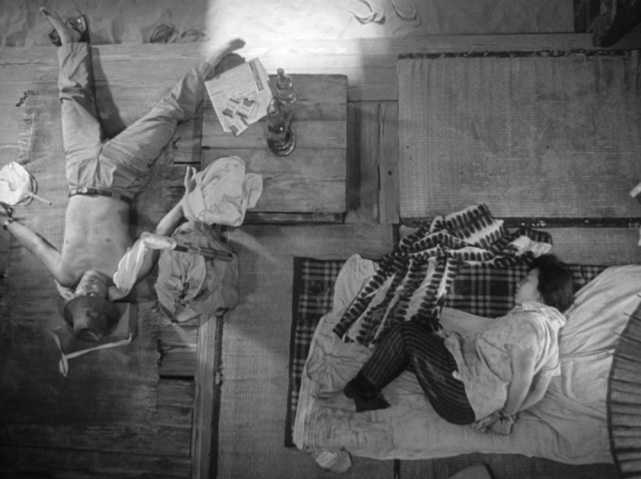 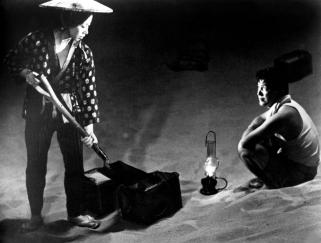 If Pitfall was to prove as a sort of segue into the surrealist, avant-garde realm of Hiroshi Teshigahara and Kobo Abe, then certainly Woman in the Dunes would set their reputation, like a jagged stone, into the hearts and minds of cinema enthusiasts, both locally and internationally.

The most widely acclaimed of Teshigara’s films (nominated for 2 Academy Awards, 1964 Cannes Special Jury Prize winner), Abe’s literary masterpiece weaves a fable-like tale of eroticism and feverish absurdity. Suna no Onna is the tale of a man and a woman… and of countless tonnes of ominous sand.

In fact, the sand plays such a penultimate purpose to the backbone of Abe’s story; as the ever-encroaching menace continuously falls on the woman of the dunes, and Jumpei Niki, the Entomologist that has now become the caged specimen in the strange community’s own voyeuristic social experiment.

In an interview with Joan Mellen, Teshigahara touched on this metaphor of sand when making the film:

‘The sandpit is meant to have an international meaning, not one particular to the Japanese. It symbolizes society itself. You could find such a sandpit in New York or San Francisco, or anywhere in the world. Like society, it is ever shifting and continuously moving. It doesn’t rest a moment. It is relentless…’

(Excerpt of ‘Voices from the Japanese Cinema’ – Joan Mellen) 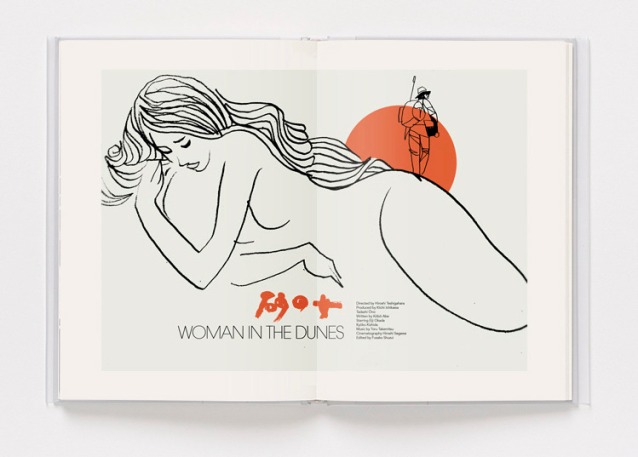 Suna no Onna should never be described as simply a film adaptation of a novel; nor should it ever be pigeonholed in that category. The art in it’s visual imagery, montage and music is better represented rather as an extension of the original work.

Teshigahara’s pacing is deliberately dreamlike; ensnaring the audience before they are even aware the walls are caving in on all sides. The on-location cinematography of Hiroshi Segawa too is simply wonderful; from extreme wides to claustrophobic close-ups and double exposed frames. So much so, that the collective relief of the audience is almost universally palpable,  as the film’s protagonist (spoiler alert) eventually climbs out of his sand-ridden tomb and attempts to escape over the dunes.

When discussing the film’s score by Toru Takematsu (who also wrote compositions for Kurosawa’s masterpiece Ran in 1985), Roger Ebert said that the music:

‘doesn’t underline the action, but mocks it, with high, plaintive notes… harsh, like a metallic wind’.

The Face of Another – Tanin no kao (Teshigahara Productions/Tokyo Eiga Co. 1966)

‘Suppose the face did not simply exist but was made. I had planned to make a mask, but actually I had not made a mask at all. The mask had become my real face, and thought itself in fact real…’

Translated excerpt from the novel ‘The Face of Another’ by Kobo Abe. 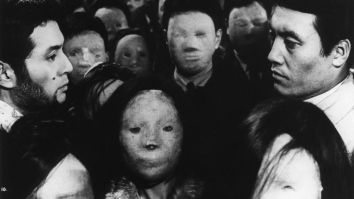 Quite possibly the darkest out of the aforementioned films, Teshigahara and Abe’s third joint project is a psychological exploration of alienation and identity… challenging any preconceived notions regarding human anatomy, and the effects of social isolation.

The profundity of Tanin no kao, or The Face of Another does not necessarily lie in it’s subject matter. Abe’s tale of engineer Mr. Okuyama (played by Tatsuya Nakadai, who also featured in Kurosawa’s Yojimbo) and his spiralling descent into social and physical isolation, after having his face disfigured in an unspecified accident, reminds one of John Frankenheimer’s Seconds (released in the USA that same year), or even Georges Franju’s Les yeux sans visage (released in France 6 years prior).

What is truly unique about Tanin no kao is it’s surrealist slant of proceedings… as the protagonist’s triumph in forging a new face, is in effect his own tragic failure. 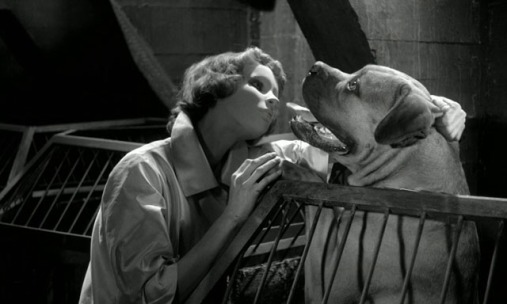 This contradictory knife-edge, or tightrope that it’s characters traverse typifies much of Kobo Abe’s fiction. The novel, which is written in the first-person narrative, serves as a sort of confessional for Mr. Okuyama; while Teshigahara’s substituted use of voiceover narration in the film carries the plot. It’s also worth mentioning the social undertones and impending gloom of a post-nuclear Japan that are evident in the backdrop of The Face of Another, further example of Abe and Teshigahara’s knack to balance elements of realism with the surreal.

Teshigahara also peppered the film with almost strikingly identical shots; so the audience gets a sense of the central character’s neurotic behaviour, as he juggles his alternate identities.

When speaking on the film, Hiroshi Teshigahara added that:

‘This movie is about the breakdown of communication between people, not only in Japan, but universally…

…I sought to convey the magnitude of human isolation and loneliness…’